Vint Cerf is considered one of the “fathers of the Internet” and is a widely respected internet trailblazer. One of his main early accomplishments was the role he played in establishing the first commercial email system which led to the adoption of the channel that we see today. 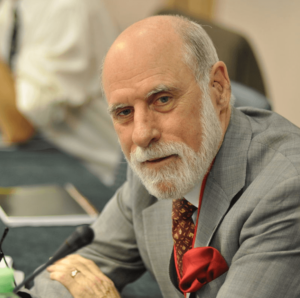 Vint Cerf is the chairman of the ICANN board and sits on the board of various other institutions. Two prominent examples of this are the Council on CyberSecurity and the Association for Computing Machinery.

He has won numerous awards for his work in the field of computing and the internet. The Turing Award, The Presidential Medal of Freedom, the National Medal of Technology, and the Marconi Prize are among this impressive list.

Vint Cerf holds a B.S. degree in mathematics from Stanford and got his Masters and PhD from UCLA. He has also been the recipient of numerous honorary degrees from over 15 other universities.

He is still very active with his career and doesn’t appear to be stepping away from the technology spotlight anytime soon.Vint Cerf is fairly active on Twitter and you can find his profile here.