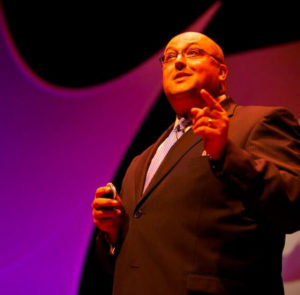 Siva Vaidhyanathan is the author of Antisocial Media: How Facebook Disconnects Us and Undermines Democracy, which was published in 2018. He has written other books, including Intellectual Property: A Very Short Introduction, The Googlization of Everything – and Why We Should Worry, Copyrights and Copywrongs: The Rise of Intellectual Property and How It Threatens Creativity, and The Anarchist in the Library: the Clash Between Freedom and Control Is Hacking the Real World and Crashing the System.

In addition, along with Carolyn Thomas, he edited the collection, Rewiring the Nation: The Place of Technology in American Studies. He has also been published in The New York Times, Bloomberg View, American Scholar, Dissent, The Chronicle of Higher Education, The New York Times Magazine, Columbia Journalism Review, Washington Post, The Guardian, Esquire.com, The Virginia Quarterly Review, The New York Times Book Review, and The Nation. In addition, he has been featured on Slate.com and BookForum.

Siva Vaidhyanathan contributes frequently to radio programs and news programs including BBC, CNN, MSNBC, CNBC, ABC and The Daily Show with Jon Stewart on Comedy Central. There was a play called Privacy in 2015, where he was portrayed on stage.

He writes a regular column for The Guardian. His most recent article, “Mark Zuckerberg doesn’t understand free speech in the 21st century” is a fascinating perspective on Facebook and how it works in the world today. He points out how oversaturation of information leads to emotion drowning out reason, and reason along with deliberate discussions is what keeps democracy afloat.

Many of his articles focus on social media and the spread of information in the digital age. Some of his articles are as follows: “A world overrun by white nationalists needs a good rock and roll film,” “From Trump to Fox News to8chan: the web of white supremacist rhetoric is wide,” and “Billion-dollar fines can’t stop Google and Facebook. That’s peanuts for them.”

Siva Vaidhyanathan engages in public speaking and his expertise is in how free speech overwhelms democracy, the ways that social media disconnects us and undermines democracy, privacy, copyright, and more. He often talks about the impact of digitization on society and democracy as well as how technology shapes the way that we think. He offers ideas on how to create a new Internet system that will benefit the world.

Siva Vaidhyanathan devotes a lot of energy to explaining how the rise of big tech, and Facebook in particular, is creating disconnection and undermining democracy. He points out that information pollution makes it difficult to determine what content is important and people are hit by too much of it at once. Choosing a divisive or emotional issue for a post will get your post in front of people and you start looking for emotional reactions, such as likes or dislikes. It has led to people feeling about issues rather than thinking about them. This reduces the opportunity for reasoned conversation and sharing of knowledge so people are driven apart by social media rather than being drawn together.

He also discusses the surveillance methods of social media in terms of Facebook filtering what they decide people like and collecting vast amounts of information about users. His perspective is food for thought in the digital age of tech giants.