Rebecca MacKinnon is a University of California Freedom of Speech and Civic Engagement Fellow and a University of California San Diego Pacific Leadership Fellow in the 2019–2020 academic year. In addition, she is the director of Ranking Digital Rights (RDR), which is a program that strives to promote freedom of expression and privacy on the Internet through the creation of global standards and incentivizing companies to respect and protect their users’ rights. 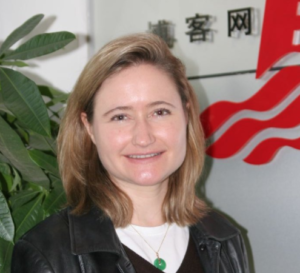 She taught online journalism and conducted research on Chinese internet censorship at the Journalism and Media Studies Centre of the University of Hong Kong in 2007 and 2008. She was the Bernard L. Schwartz senior fellow at New America from 2010 to 2012, and then she became a senior research fellow the following year. In addition, she was an adjunct lecturer at the University of Pennsylvania Law School in 2013.

MacKinnon co-founded the citizen media network Global Voices, and she serves on the board of directors of the Committee to Protect Journalists. She was also a founding member of the Global Network Initiative, which has the goal of protecting and advancing freedom of expression and privacy rights in the ICT Industry.

She is currently the director of RDR, and their Corporate Accountability Index ranks the most powerful Internet, mobile, and telecommunications companies in the world based on their commitments and policies in terms of international human rights standards. She is also a visiting affiliate at the Annenberg School for Communication’s Center for Global Communication Studies.

MacKinnon has written a book titled Consent of the Networked: The Worldwide Struggle for Internet Freedom in 2012. She publishes weekly articles on topics such as the importance of privacy and security on the Internet, freedom of speech for open and inclusive societies, and competition to allow new ideas and business models. She writes papers and publishes scholarly articles in various publications as well.

The Global Network Initiative puts forth principles based on international laws and standards for human rights and states that all human rights are indivisible, interdependent, and interrelated. Because the advancement of one right benefits all rights and the deprivation of one right adversely affects all rights, governments must respect, protect, promote, and fulfill human rights as the foundation. By the same token, ICT companies must respect and promote their users’ freedom of expression and privacy rights. The goal is that this standard become widespread enough to be adopted as a global standard.

In addition, Global Voices is a citizen media network co-founded by MacKinnon, and it is an international and multilingual community of bloggers, journalists, translators, academics, and human rights activists. They work together to use the Internet’s power to build understanding on a global level. They do this by reporting people whose experiences are rarely covered by mainstream media, translating stories into many languages, defending free speech online, and empowering local communities who lack media tools for participation.

Global Voices is borderless and mostly volunteer based. MacKinnon founded it in 2005 along with technologist and Africa expert Ethan Zuckerman. They developed the idea after they were at an international bloggers’ meeting, and it began as a simple blog with a manifesto statement.

MacKinnon is an advocate for privacy and individual rights on the Internet as well, and she has written articles and blog posts stating that people have a right to expect that tech giants such as Facebook and Google operate in a way that respects human rights.