Kevin Kelly is the Senior Maverick for Wired, which he co-founded 25 years ago. In addition, he is the editor and publisher of the website, Cool Tools. He is well known and admired for his insight into technology and how it impacts history, biology, and society. He is a philosopher, a thinker, and an environmentalist who explains technology and how it will impact our future. 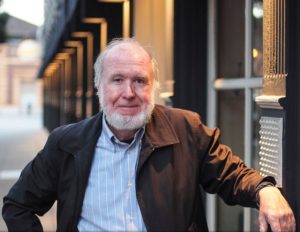 Kevin Kelly has no college degrees. He dropped out of University of Rhode Island after one year and began a career in photography. From 1972 to 1979 he was an independent photographer in remote parts of many different countries.

In the 1980s, he started writing and he started Nomadic Books, which had budget travel information for world travelers. He wrote a cover story for New Age Journal on the “Network Nation” in 1984, which was a very early report on online culture.

From 1984 to 1990, he was the editor for the Review, and in 1985 he initiated the Hackers’ Conference to bring together three generations of programming hackers. He also served on the Board of the WELL from 1985 until 1998, which was an early outpost for what became cyberspace.

In 1992, he founded Wired magazine, and he was the founding executive editor from 1992 to 1999. He continues to operate as the Senior Maverick for Wired today. In addition, he has written and published many books and his writing has appeared in many publications, including The New York Times, The Economist, Time, Harpers, Science, GQ, The Wall Street Journal, and Esquire.

Kevin Kelly started as a photographer, and he worked in remote parts of Asia, including Japan, Korea, Taiwan, Philippines, Burma, Thailand, Bangladesh, India, Sri Lanka, Nepal, Pakistan, Afghanistan, and Iran. In 1979, he became the editor for the Bell Helicopter employee newsletter in Tehran, Iran.

In 1980, Kelly initiated microphotography of the digestive system at the University of Georgia, and he made a film with Dr. John Patton that was called A Microscopic Look at Digestion.

He launched an American magazine dedicated to recreational walking, Walking Journal, in 1981 and sold it in 1984. In 1982, he also started Nomadic Books, which was a company that provided budget travel information to world travelers. He sold it in 1984.

In 1984, he wrote the cover story for New Age Journal on “Network Nation,” which took a look at online culture. From1984 to 1990, he edited the Whole Earth Review. He also became the publisher of Whole Earth Catalogs after the founder left in 1986.

In 1988, he conceived and edited Signal: Communication Tools for the Information Age, which was all about digital resources and culture. From 1990 to 1994, he researched and wrote Out of Control, the Rise of Neo-Biological Civilization. He was the founding executive editor of Wired magazine from 1992 until 1999, and he still serves as its Senior Maverick today. His magazine won the National Magazine Award for General Excellence in 1994.

In 1998, he completed New Rules for the New Economy, which was a best seller on the dynamics of the network economy. Then, in 2000, he conceived and launched the All Species Inventory, which was an effort to discover and catalog all of the living organisms from one generation.

In 2002, he published Asia Grace, which is a book of 600 photographs of life in Asia with no words. He created Cool Tools, a weekly email list and website in 2003, and he published a limited edition of it in book form, Cool Tools 2003.

In 2013, Kelly self-published Cool Tools: A Catalog of Possibilities, which became a bestseller on Amazon. In 2016, he published The Inevitable, which discusses the next 30 years of technology.