Joanne McNeil is an American writer who explores the ways that technology has an impact on art, literature, and society. Her book, Lurking: How a Person Became a User, goes through the history of the Internet from the perspective of the experiences of users. The developers create online experiences, and users run through them. The book starts with dial up and goes through all of the advances ending up today where the Internet is controlled by tech giants, such as Google, Facebook, and Instagram. It puts into words the experience of being online, which is recognized by users across the world. 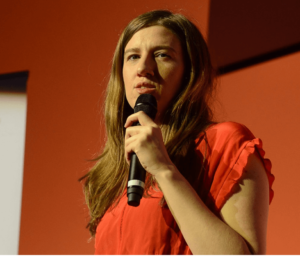 Joanne McNeil was awarded the inaugural Arts Writing Fellowship Award for an emerging digital arts writer by the Carl & Marilynn Thoma Art Foundation. In addition, she is a 2019 Logan Nonfiction Program fellow. In 2012, she was the USC Annenberg/Getty Arts Journalism Fellow.

She was also an Artist-in-Residence and an Impact Resident at Eyebeam, a place where artists think creatively and critically about the effects of technology on society in an effort to reveal new paths toward a more just future for all. She has also been an instructor at the School for Poetic Computation.

Joanne McNeil studied economics at George Mason University, where she was a University Scholar. She has worked with a number of different organizations in her career. Most recently, she collaborated with Eyebeam to develop student workshops on networks. She is also one of the founding editors of the technology based opinion magazine that Medium publishes, The Message.

She writes essays and reviews, which have been published in The New York Times, The Baffler, Filmmaker, Domus, The Los Angeles Times, Frieze, Wired, The Boston Globe, Modern Painters, Dirty Furniture, n+1/Occupy Gazette, Saturated Space, Dissent, and other print and web publications.

In addition, she contributed to books by AND/The Piracy Project and Space Caviar. She was also a contributor for The Black Dog Publishing book, Art and the Internet in 2014, as well as other catalog essays. When she was editor of Rhizome at the New Museum, she helped to transition its blog to a daily publication, and she edited and developed the content for Rhizome News and the Rhizome Blog.

She co-curated the online programming for the 2012 Liverpool Biennial through Rhizome and FACT. Before that, she founded and edited the blog, The Tomorrow Museum. She also had an essay that was listed in The Verge’s Best Writing of 2013.

Most recently, Joanne McNeil has published her first book, Lurking: How a Person Became a User. She has written several works of fiction, including The Newcomer, published in Failed States Issue 3, 2019, Users, published in Noon Magazine, The Joy Issue, 2018, and After the Eclipse on Paragon Hill, published in Eclipsecore in August 2017.

She has also written a number of essays, including Big Brother’s Blindspot for The Baffler in July/August 2018 and Why Do I Have to Call This App ‘Julie?’ for The New York Times on December 20, 2015. She has written a number of columns for the Medium as well.

McNeil writes columns, reviews, and short stories, and she contributes to collaborative works. She writes a column called “Speculations” at Filmmaker magazine, which contains essays on science fiction films, books, art, and other culture.

Her book, Lurking: How a Person Became a User takes the unique perspective of detailing the history of the Internet from the perspective of the users. Rather than focusing on the developers, the architects, the influencers, and other aspects of the Internet, it addresses those who create very little and consume most of the content on the Internet.

Users lurk, click links, read posts, and without realizing it, they are behind the multi-trillion dollar digital economy. This book addresses the history of the user experience and how it has changed communication habits and shifted culture.